Next meeting of the Congress
Florence (Italy)

Art as the source of a new hope

Eugène Green‚Äôs film La Sapienza was also an inspiration: it tells the story of the meeting between an accomplished but disenchanted architect and a young man still driven as he begins his architecture studies. Together they take a journey of self-discovery to Rome in the footsteps of another architect from the 17th century, Borromini, in search of the relationship of light with the built space of human constructions and the inner space of human beings. They come back transformed, both moved by a new hope that gives meaning to their chosen line of work and to their existence.Following an invitation extended by two participants at the end of the 2017 Paris meeting, Florence was chosen to be the site of the next congress.


We would like to see Florence with you like Eugène Green and his actors look at Rome: to go from a world in front of us to the one we bear within us, vaster and without outline. We would like to look “together” like them, to experience a shared contemplation that at once recreates the work we sometimes think we already know from every angle and recreates us in turn. 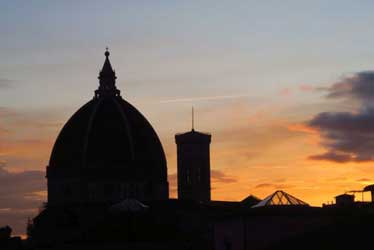 Like many other Italian cities, Florence bears witness to man‚Äôs quest for beauty and his wondrous artistic skills. It also bears witness to a profound mutation that took place in Renaissance Europe: at the same time as man‚Äôs creative genius was unfolding, there occurred a gradual estrangement between “inner” man and “outer” man, so that this “Renaissance” also raises questions for us.

Last June, we were introduced to Centro Ave Arte, a group of artists and architects based in Loppiano, a few kilometres from Florence, at a time when its members were also beginning to work on the theme of an artistic meeting. We then started to get a sense of what might be the common thread of a congress we would prepare together: art and architecture have the capacity to humanize us. That is their “mystagogical” function: to open us to the mystery that constitutes us as human beings, at the inner source in which we have our roots.

From the Romanesque church of San Miniato to contemporary artistic creation‚Ä¶ the initiators of the congress invite their friends to join them in Florence and Loppiano to experience this meeting together.

To register, please contact one of the initiators of the congress with which you are in touch.